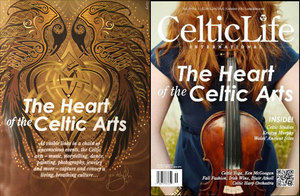 Visual artist Jen Delyth grew up in South Wales, near Swansea, Port Talbot, and the beautiful Gower Peninsula. Her heritage is a mix of Welsh and Cornish.

"My great-grandfather - I remember him as a very old man, sitting in his armchair by the fire with his cloth cap and pipe. He came to work in the steel works of Port Talbot, when the tin ran out in Cornwall, at the turn of the century."

A self taught artist, Delyth followed her heart to California when she was 25, settling in the San Francisco Bay Area.

"I was quite homesick at first - we all it Hiraeth in Welsh - longing of the home-land - and my love and respect for the rich culture of my home country grew stinger as I realized what I had left behind, or perhaps what I had brought with me."

She has been fascinated by folk tales and mythology since her childhood.

"My mother shared her love of Welsh culture with me. When I came to California in 1985, I was captivated by mythologist Joseph Campbell's wonderful lectures with Bill Moyer. He talked about the wisdom traditions at the heart of folk cultures around the world - but did not seem to focus much on the Celtic - - which lies at the roots of our own western tradition. That inspired me to use the ancient visual language to start "dialoguing" about the mythic symbols and figures of my own culture, and to shine a light on the power and spirit within our natural world."

To her surprise, her initial works were well received.

"I quickly realized that there is a strong connection here for many people whose ancestors made the journey to the new world."

"Making a career with Celtic Artwork hasbeen possible for me because of the interest here, in a way it may never have blossomed back home, where we often take it somewhat for granted."

She is encouraged by the revitalization of Celtic culture in Wales.

"I love going home and seeing the news, soap operas and great programming all in Welsh on the television. Today the Welsh language is more widely spoken and encouraged, and not repressed as it was in my grandmother's time. We are a modern Celtic nation, forwards looking, and proud of our cultural heritage. In the "immigrant" countries of USA, Canada, Australia and elsewhere, I meet many folks at shows who appreciate their Celtic heritage.
Celtic culture is a living tradition - recalling the past as it reinvents itself."