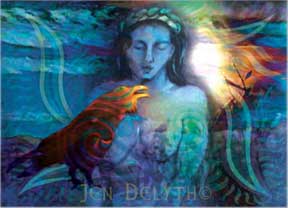 The Woman of Tears who had her feet far down amongst the roots and trees, stars thickening her hair as they gather in the vastness and blackness of the sky on a night of frost.” —Fiona Macleod

Blue Morrigan is the wise goddess of the mysteries of light and dark, past and future. Ravens have a close affinity with the supernatural world. With their bright eyed intelligence and communication with the Mysteries - they are associated with rebirth, and are the totem birds of the Celtic Goddesses the Badbh and the Morrigan. In this painting, she also represents the ancient Calleach - the Washer at the Ford. A powerful figure, standing on the boundary of the river between this life and the next. She shifts between the figure of an old woman, and a beautiful young girl, between Queen of Winter, and then of Spring. She is midwife of our journey to the Otherworld. In Scotland she is the Bean Nighe, known in many guises, each an aspect of the wisdom of the old dark creature who stands at the brink of death and destruction, but who also holds the wisdom of rebirth on the other side.
Original Painting & Limited Edition Print by jen delyth ©2013