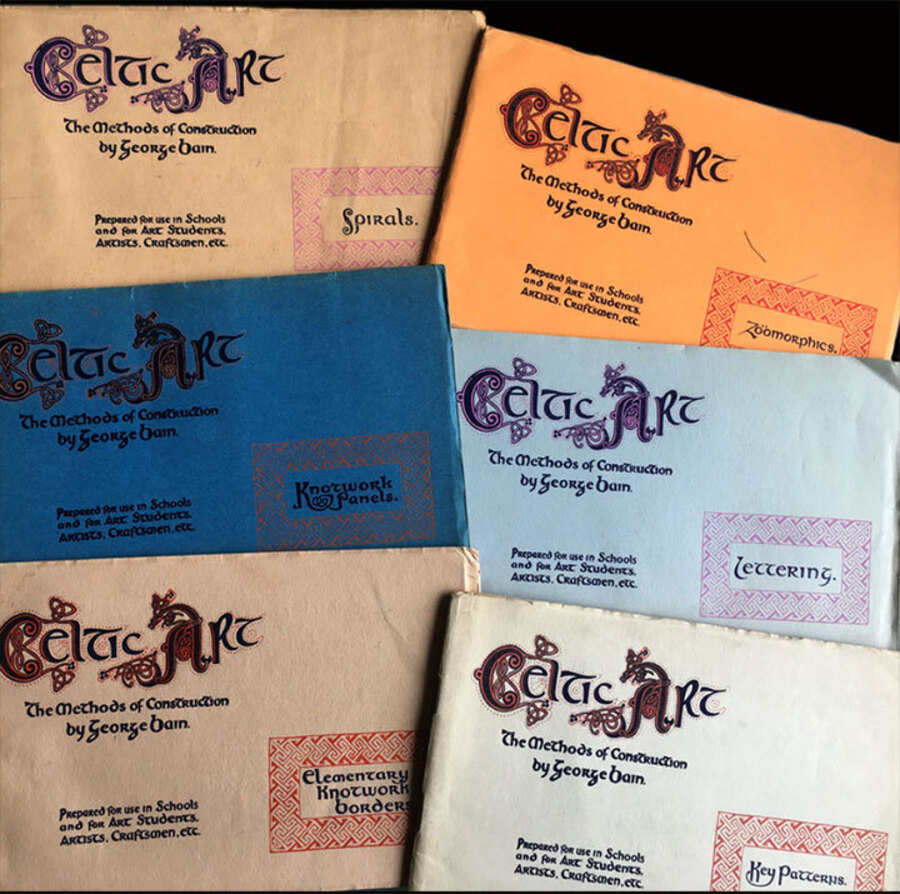 This collecting early editions bug began when I wondered if I could find a complete set of small first, second or third edition printings of George Bain’s charming half sized small card covered “Celtic Art - Methods of Construction” . These charming teaching books, almost pamphlets - were first published in 1944, later combined into one larger book that is still published in an inexpensive Dover publication today. These Celtic Art pattern books were important in beginning my personal journey as a Celtic Artist, as they were, and are, for many others. There are originally 6 small books - and one by one, I found them, over the years - and now have a complete set of the first pressings… including one first edition which is very rare!

I found one in a small Scottish book shop, one was posted to me from Cornwall, one had made its way and survived to Canada… My sister Susan gifted me one, that she found in a small charity shop in Cumbria! I found them from here and there, setting the price I was willing to pay to not more than $20.00 a piece - some I found for less. Fairly rare to find, and quite fragile, they pop up in unexpected places. Being paper stitched books, not many have survived, and probably not a great demand for the, except by a collector like myself, and of course not many were printed at the first pressings (although I can’t find anywhere how many were initially printed).

Super exciting to find a first edition that has survived the many years, and thrilling to eventually complete my collection of an entire set!

Back in the 70s and 80s, many of us - budding contemporary Celtic artists - began a journey inspired by the Celtic art books published by George Bain - “Prepared for use in schools, and for art students, artists, craftsmen etc” as stated in calligraphy on the front of the first small teaching pamphlets that Bain so lovingly and hopefully published through William Maclellan press, 240 Hope Street in Glasgow in 1944. (Wikipedia says 1951, but I have one first edition dated 1944). They were 2’6 each back in 1944 - which is 2 guineas apparently - as printed on the inside paper cover. I love the "Certificate of Achievement" too! 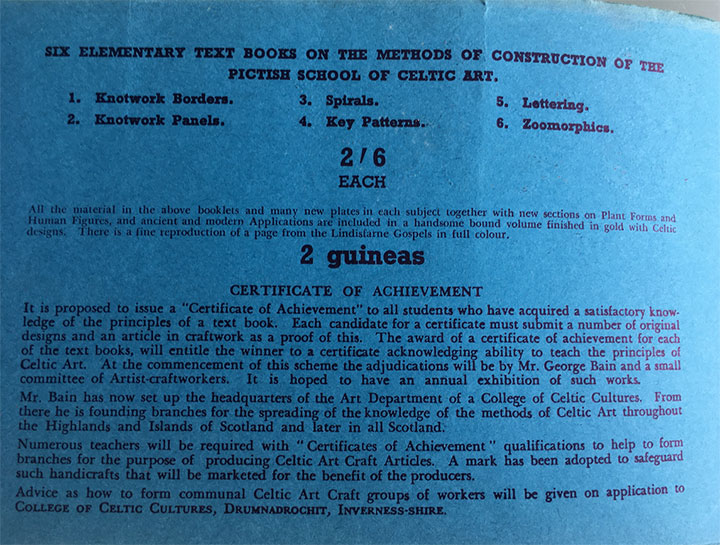 In the frontespiece George Bain writes a charming dedication:

“Dedicated to my friend Hugh A. Graser, Drumnadrochit - who first introduced me to the works of J. Romily Allen and sent me on this most engrossing quest”.

This cloth covered hard back is printed on heavy paper, with high quality plate photographs and illustrations of Celtic antiquities and illustrations of the ornamental Celtic knot work, animal and spiral designs that Allen showed are a common pattern “language” found upon the often fragmented objects that survived from the ancient Celtic world. This is a book authentically researched, been republished into our times, and an important source book on the subject of Celtic Art. 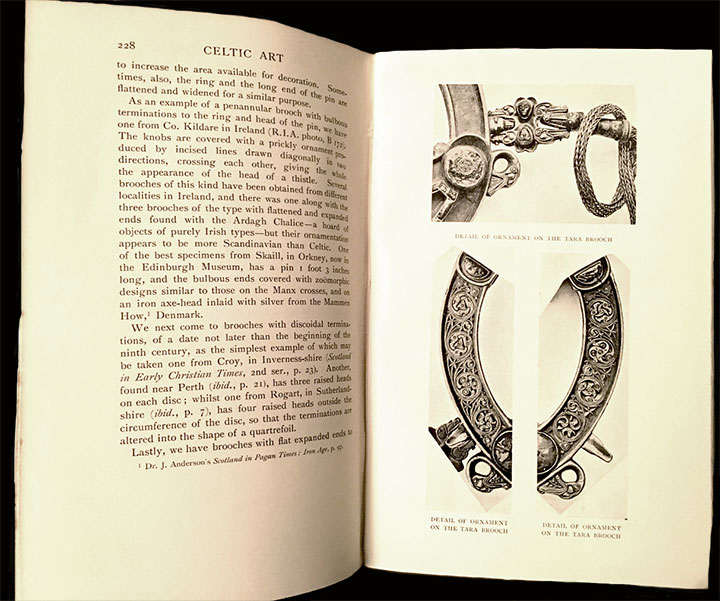 The book itself, that I am touching as I write this, is also a work of art in itself… Illustrations - or perhaps just the quality photographs - are “electrotypes” - a quality reproduction we don’t see today. I was curious, and looked up (on the internet of course) what an electrotype is - and its definition is:

“a copy of something made by the electrolytic deposition of copper on a mold”.

So these plates (I will call them plates), printed the reproductions of photographs taken with real old lens cameras, developed with real film, of actual real objects made by actual real Celtic people...

How beautiful is that!

Allen writes in his preface:
“the theory of the evolution of Celtic knot work out of plait work… is entirely original, and, simple as it appears when explained, took me quite twenty years to think out whilst classifying the patterns that occur on the early Christian monuments of Scotland, England, Wales, and Ireland, nearly all of which I have examined personally”

“Examined personally” - I love that! Allen presented material that was only available until then to a small group of antiquarian scholarso who searched in often hidden hard to find areas of the musty vaults of a museum here or there... Of course, local people that actually lived close to stone carvings, local textiles and decorated pottery - every day objects that continued to use the old patterns - would also be familiar with these interlaced and spiral patterns that are part of the living tradition of the Celtic world.

I wonder about these early books on the subject of Celtic Art - whether Allen, or Bain could have even possibly imagined their potential to inspire a proliferation of “Celtic” art being created today, in the 21st century. Today, artists and craftspeople, are designing new inspired artworks using the patterns laid out by Allen and Bain, as well as reproductions of varying qualities, perhaps made in countries far away from the world of the Celts, often ascribed with fanciful meanings such as “the father daughter knot”, that can be found in gift shops from Ireland to Japan - the world over. 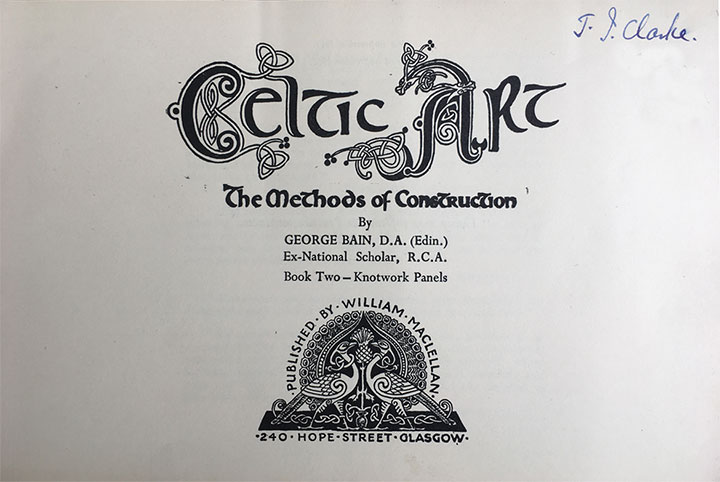 These scholars and writers have given us so very much to build on. To own their original pressings of books that inspired so many, even if after their death, is such an honor and delight for me!

Before Allen, came another important first edition Celtic Art source book I am proud to own - predating Allen’s book that inspired Bain, is Margaret Stokes - a leading Celticist - who gave us “Early Christian Art in Ireland” with one hundred and six woodcuts - published in 1887 by Chapman and Hall Limited, 11, Henrietta Street, Convent Garden. Margaret Stokes was a female scholar, antiquarian, illustrator, who became the first Irish woman to be elected an honorary member of the Royal Irish Academy in 1876 and of the Royal Society of Antiquaries of Ireland. She was a remarkable woman, in a field dominated almost entirely by men, and her book probably inspired Allen, who inspired Bain, who inspired us. 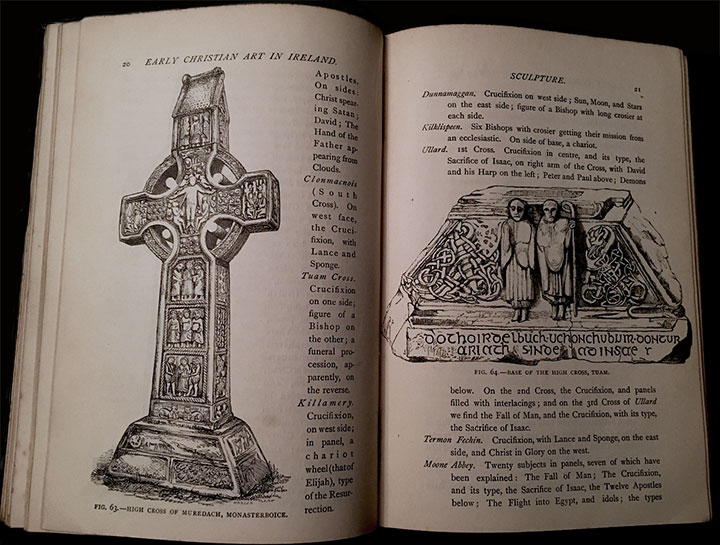 My first edition copy is so beautifully printed with clear plates of the original photographs and woodcuts, that are frameable - should someone do a wicked deed and cut them out of the original cloth bound book! 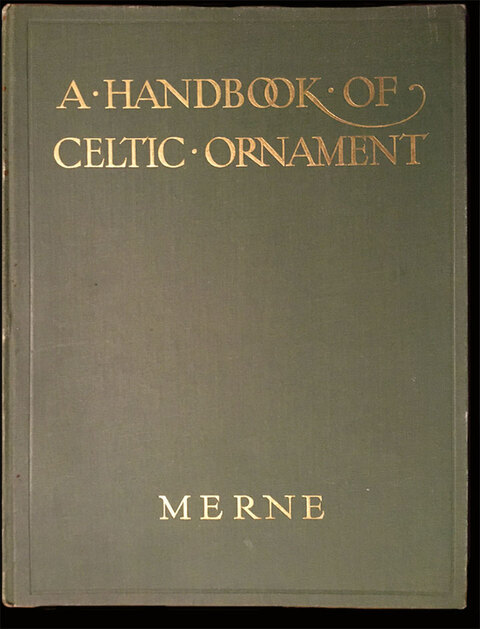 Another very important Celtic Art book published in 1931 - is John G. Merne’s book “A Handbook of Celtic Ornament” . Printed in Ireland, and published by Isaac Pitman & Sons Ltd, Parker Street, Kingsway London, I proudly own a beautiful first edition. With its green cloth covered, gold gilt titles, this book predates Bain's books, and perhaps he was not aware of the Irish edition ... but it seems like he must have come across it... Merne's book teaches a method of creating Celtic patterns and ornaments, with illustrations and instructions printed on a heavy paper. 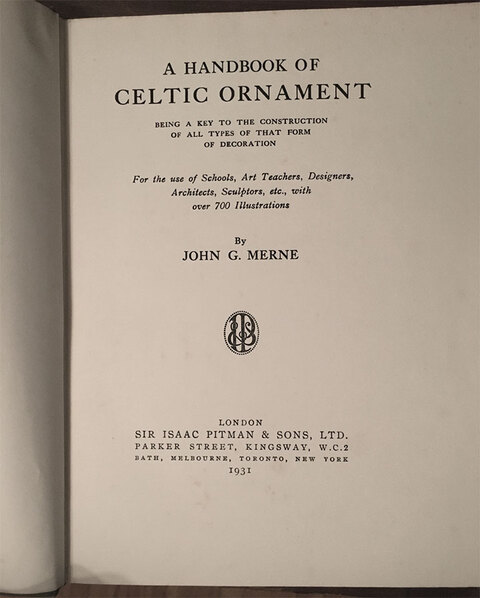 Although less well known perhaps than George Bain’s teaching books that were published a decade later, Celtic art enthusiasts are well aware of this early book on the subject.

“ Being a key to the construction of all types of that form of Decoration. For the use of Schools, Art Teachers, Designers, Architects, Sculptors, etc., with over 700 illustrations” 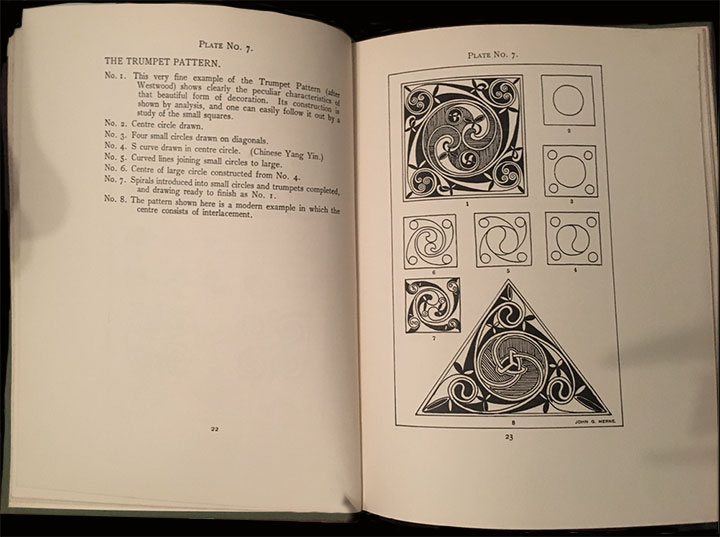 So here I am, touching these important and beautifully printed books as I write this… wondering - and in some cases reading inscriptions - of who owned and touched them before me… Who will hopefully enjoy them after me…?
They are significant - how they have inspired many of us as artist's. But also they are beautiful art books created with the integrity of materials and tools of their time.
Their journey as published books kindled the interest in each next writer's publication, and continues with new insights by contemporary artist's and designers creating their own books and new methods on the subject.

Their journey into the hands of appreciative collectors in the future will hopefully continue. I wonder who will own these books one day when I am gone, and if they will inspire new work, a love of the ancient tales and poetry, as they have for me :)