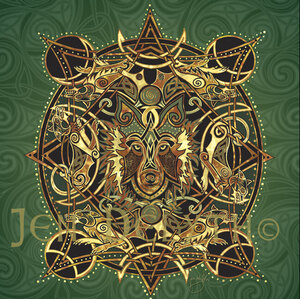 Wolf Moon - Lleuad Blaidd - The hungry wolf calls to the moon - for change will come. Faoilleach - the old Gaelic/Irish winter month means the Month of the Wolf. The cold January Wolf Moon lightens the path of the hunters, showing the way.
Intuitive, shadowy, Wolf is often connected with the Moon and her cycles. In Celtic mythology, Wolf is companion to the fertile white moon goddess Cerridwen. Although Wolf is often associated with war and destruction, these are ancient mysteries of death and rebirth as guides to positive change. In Gaelic wolf is Madadh Alluidh, or Mac Tire meaning "Earth's Son". Fierce, shy, loyal and cunning - wolf communicates power and leadership through eye, voice and body language to the pack. He is one of the totem guardians of the Celts. Cormac - the Irish King - was suckled by wolves, and wolves appear on the Gunderstrup Cauldron, with Cernunnos - the forest stag god. In Norse mythology, the wolves Hati and Sköll chase the sun and the moon
across the heavens - creating day and night until the end of the world - Ragnarok.