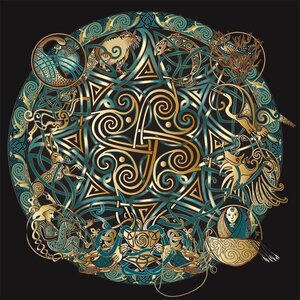 Shapeshifters are a profound magical element in Celtic mythology, as well as in many folk and magical traditions around the world. Animals and humans change into different forms, perhaps as punishment or with their magical gifts of transformation and metamorphosis.

In Irish mythology, the Morrigan was a shapeshifting warrior goddess who appears as the Raven, and also as three women, maiden, mother and crone. In Scotland the Selkie changes from seal to human by removing their seal skin, and the kelpie is a water horse creature, who is also a seductive and dangerous handsome man.

Legendary figures, spirits or deities may take the form of deer, such as Oisín and Sadhb. The Children of Lir are transformed into swans.

In the Welsh myth of Taliesin - Gwion Bach must stir a brew of wisdom and knowledge for the sorceress Ceridwen. When Gwion accidentally receives three drops onto his thumb, he receives the magical potion meant for her son. To escape the wrath of Ceridwen, Gwion changes into a hare, but Ceridwen changes into a greyhound and chases him. So Taliesin shapeshifts into a fish in a river, so Ceridwen becomes an otter and closes in on him. Talliesin transforms into a bird, Ceridwen into a hawk, and then Taliesin hides in a pile of wheat as a single grain. Ceridwen becomes a black hen, and eats it all, and so Gwion grows for ninth months inside her. When the baby is born, he so beautiful that Ceridwen cannot kill him, and so she casts him out in a leather bag upon the water. After a magical journey, where Gwion is nurtured by the birds and creatures of the sea, he comes to land in the salmon wier, and becomes the shaman bard Taliesin - which means "Radiant Brow" for his magical gifts of poetry and inspiration.