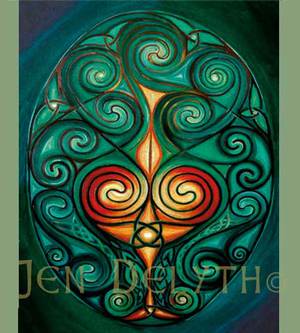 Many world mythologies speak of a cosmic egg - symbol of the primeval universe - or the Great Mother who created it.  Orphics said Mother Night, the Great Goddess of darkness, first birthed the World Egg which was identified with the moon.  The 'Druid's egg' or 'serpent's egg' or 'snake stone', was an object which had powerful mystical properties.  On St. John’s Eve, it was said that the snakes twisted and writhed in a tangled knot, creating the “glain”.  The egg emerging from the ball of vipers, floated mysteriously upward into the air, to be caught by the priests while in the act of falling. It was said that the Druid who found himself the fortunate possessor of this invaluable treasure would quickly make his escape by leaping upon a horse, not stopping until he had got to the other side of the first running water.  His pursuers were stopped by the stream; they could follow him no farther.  Immense magical power and wisdom were believed to be gained by the possessor of the Druid’s egg, although few have ever seen one.  The Serpent’s egg is the Philosopher’s Stone sought by the alchemists, and the Grail quested for by the Chivalric knights.
Original Design and Text by Jen Delyth  ©1996