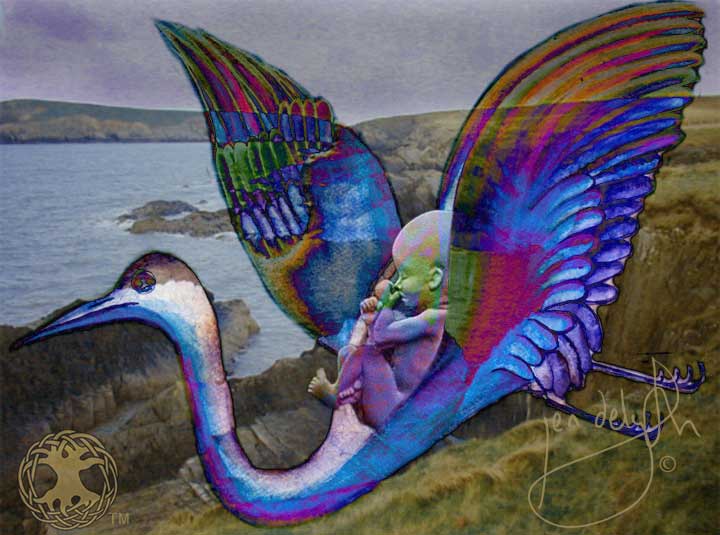 SAINT CENYDD
Jen's family lived in Llangennith - Gower Peninsular in South Wales- for many years. This is a short excerpt of the story of Cenydd - (Llangennith means place of Cennyd)

St. Cenydd is one of the early Celtic Christian figures, the local mythic saint of Llangennith, Village of Cenydd, in the Gower peninsula of South Wales. Llangennith is built on a brackened hill above the sweeping sands of Rhossilli Bay. The ancient village looks out over the wild sand dunes that stretch to the rocky headland where St. Cenydd the Celtic hermit monk lived - fed only by the mouths of seagulls and the milk of a doe. In the sixth century Saint Cenydd founded a priory there, which was destroyed by the Danes in 986.

It is a beautiful and quintessential Welsh myth of a hermit Holy Man, which tells the story of communion between nature and man, spirit and healing, and is a wonderful example of a Celtic Christian myth of the early sixth century.

...."The unwanted baby was put into a wicker basket woven of osiers and cast adrift upon the waters of the Loughor estuary, which soon took him out to sea. It was a wild and stormy night, and the waves tossed the small wicker boat-basket up and down as it came ever closer to the jagged rocks of Bury Holmes Island.

Just as baby Cenydd was to be doomed upon the black rocks, a flock of seagulls came down and rescued him. Snatching up the basket in their long beaks, they flew high up to the top of a cliff and set him down in safety. The gulls kept the baby warm by making a nest with their soft feathers, and sheltered him from the driving rain. Calling out above the cold, loud wind, the gulls pleaded with the stormy elements to cease their battering of the innocent young boy.

For eight days and nights the gulls protected Cenydd from the worst of the storm. On the ninth day, some say an angel came down to the baby and placed a bell, known as the Titty Bell, in Cenydd's mouth. This miraculous breast-shaped bell gave constant nourishment to the boy, who grew tall and strong as the angel watched over him and educated him in the new faith. Others say that a deer came out from the woods and nurtured the boy, sharing her milk and teaching him the ways of the animals, the secrets of the woods and the elements.....