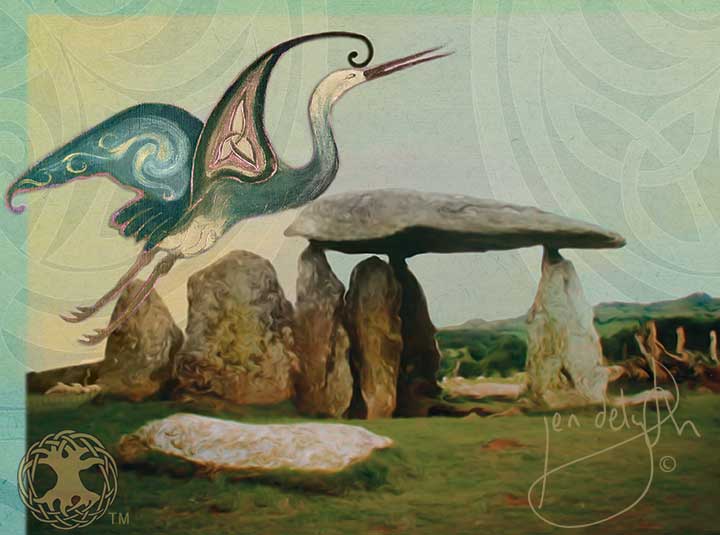 Welsh Folklore and legends have deep roots in prehistory. South Wales, which has a similar language and coastal environment to Brittany, was once a fertile home for the Paleolithic and Neolithic peoples. The coast and inland estuaries are rich in shellfish, and the climate, warmed by the ocean, is mild. There are many sheltering caves along its rugged coast, which continued to support the later Celtic people who arrived from the south and the east. Their culture is intertwined with that of the ancient Britons who lived before them.

There are still a great number of megalithic monuments in Wales, but many have disappeared, partly due to the attempts of the Church to quash the vestiges of the Old Religion - the folk superstitions and faerie lore connected to the ancient sites. It is a testament to the enduring nature of the old ways and the deep connection that many local people have had to them over many years that respect for the stones persists. Stories and myths about them have been preserved within folk memory for us to enjoy today.

"Our Pembrokeshire witness is a maiden Welshwoman, sixty years old. She was born and has lived all her life within sight of the famous Pentre Evan Cromlech, in the home of her ancestors. She told me 'My mother used to tell about seeing the "fair-folk'"dancing in the fields near Cardigan; and other people have seen them round the cromlech up there on the hill' (the Pentre Evan Cromlech)."

Dating back to about 3500 BC, Pentre Ifan – which means Evan’s Village – was once partially covered by a great cairn used as a communal burial chamber. It was also known as Arthur’s Quoit, after the legendary King Arthur whose numinous presence is everywhere in Wales. In the midst of lovely Welsh farmlands this enigmatic dolmen overlooks the Nevern Valley, commanding extensive views. Carn Ingli, the mountain from which the Stonehenge bluestones allegedly originate, overlooks Pentre Ifan. The entire landscape is saturated in myth.