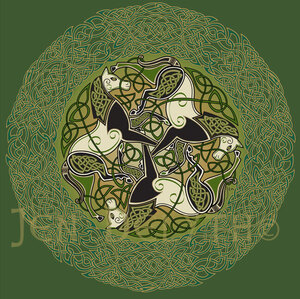 The Horse was of tremendous importance to the early nomadic Celts, a major symbol of energy, power and fertility. Epona is the White Mare Horse Goddess, also known as Rhiannon (Wales) and Macha and Etain (Ireland). The Belgae who worshipped Epona, probably carved the famous White Horse — 370 ft long —into the chalk at Uffington (in Berkshire). The fertility cult of Epona stretched from Spain to Eastern Europe and Northern Italy to Britain. Irish Kings were still symbolically united with a white mare in the 11th century, the White mare representing the land of Ireland, whose fertility is assured by her union with the mortal king. The horse symbolizes the soul’s journey to the Otherworld and Underworld —the land of the dead. The ghostly gray cloud horses were the steeds of Odin’s ‘wild hunt’ made up of the souls of the dead galloping over treetops. Another relic of pre-Christian horse worship is the morris dancer’s traditional horse-headed stick, or ‘hobby horse’ — the ‘cock-horse’ ridden to Banbury Cross to see the Goddess make her ritual ride as Lady Godiva. This design by Jen Delyth, is based on the Pictish carving of the Scottish Inverurie Stone. (thanks to George Bain).
Design & Text by Jen Delyth © 1993