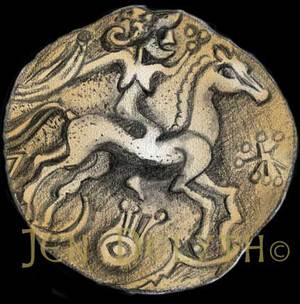 Boudicca - from Gold Slater–Celtic Coin–minted by the Coriosolities tribe, 1st half of 1st Century BC.  Boudicca is the courageous Brythonic warrior queen of the Iceni tribes who united and led her people in a last massive revolt against the Romans who occupied her lands. When her husband Prasatagus died, Boudicca became queen by inheritance, but the Romans – in a ploy to take control of her land and people – refused to honor Celtic law, claiming that they only recognized the male line. When Boudicca resisted she was flogged and her daughters raped, and this terrible insult brought Boudicca and her people together in a massive uprising against the Romans. Boudicca rode at the head of her warrior army in her chariot, her long red hair streaming behind her and a heavy golden torc around her neck, fixing onlookers with a piercing glare. Said to have a small brown hare hidden in the folds of her cloak, she went riding against the powerful Roman military forces in defiance of their attempt to subdue her Celtic people. Boudicca means victory, and the rebellion began to gather force from other tribes who had been ill-treated by the Romans. The Celts were at first successful in causing much damage, destroying cities and wiping out entire Roman legions. The sack of Londonium, London, was particularly savage, perhaps in retaliation for the rape of Boudicca’s daughters.  At their last stand at the edge of a forest near a narrow gorge, the Roman commander Suetonius and his legionnaires used their tactical advantage to crush the warriors and their families. Boudicca poisoned herself to avoid capture, a last act of defiance by the Celtic queen who believed that honor and freedom were worth the great sacrifice made by her people. Although the Celts were ultimately unsuccessful in their rebellion, Boudicca’s name was never forgotten, nor was the pride of her people who resisted the great power of the Roman Empire. The battle was lost, but their spirit could not be broken.
Artwork and Text by Jen Delyth  ©2003