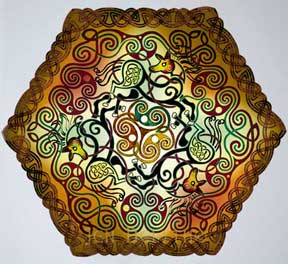 The White Mare Horse Goddess is known as Epona, Rhiannon (Wales) and Macha and Etain (Ireland). Emain Macha, Macha’s Twins, is a sacred site from Bronze Age times that is named after the horse goddess. In mythology, Macha dies in childbed after she overtakes the swift horses of the kings in a race while pregnant. The Welsh horse goddess Rhiannon bears a child who disappears and then is found in a stable where mares have just given birth and their foals have disappeared – implying a mystical exchange or association between them. Rhiannon’s husband assumes that she has harmed their son, and assigns her the punishment of carrying people upon her back as a horse. The horse symbolizes the soul’s journey to the Otherworld and Underworld —the land of the dead.  The ghostly gray cloud horses were the steeds of Odin’s ‘wild hunt’ made up of the souls of the dead galloping over treetops. The Belgae who worshipped Epona, probably carved the famous White Horse — 370 ft long —into the chalk at Uffington (in Berkshire).  The fertility cult of the Sacred Mare stretched from Spain to Eastern Europe and Northern Italy to Britain.
Original Design & Text by Jen Delyth © 1993