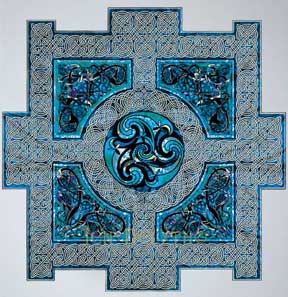 The Lindisfarne Gospels, made in north-east England less than a century after the introduction there of Christianity, is one of the world's greatest masterpieces of manuscript painting. The four holy men who made it are documented as Aldred, Eadfrith, Ethelwald and Billfrith. The monastery of Lindisfarne was founded in ad 635 on a small outcrop of land, now known as Holy Island, lying among the sands a mile and a half off the Northumberland coast. Named Keltoi by the Greeks, the Celts were the tribal peoples of western Europe in the pre-Roman period, whose crafts-people created a brilliant art style. The monks of the early Christian Church incorporated these distinctive intricate weavings and knotwork patterns into their illuminated gospel manuscripts. Celtic patterning reflects the Celtic belief in the continuity of life, the interconnection of all things. Plants, animals, Otherworldly divinities, the elements themselves are venerated in these magical weavings. This design is a re-interpretation of an original design from the cross carpet page of the Lindisfarne Gospels - the Gospel according to Mark
Original Design & Text by Jen Delyth © 1994