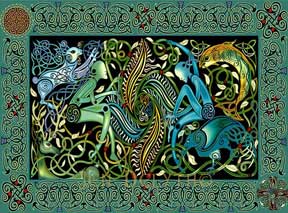 Taliesin is a mythical figure, and one of the greatest Welsh poets. The story of the mythical Taliesin - whose name means “Radiant Brow” shows the esoteric arts of poetry- to stir the cauldron of inspiration, to transform and move through the elemental forces, and finally to channel the gift of the arts into the world through rebirth in the waters of spirit. In the myth, Cerridwen, the Welsh crone, or Goddess of dark prophetic powers, is a powerful mother Goddess (her totem animal is the sow). Her son Afagddu was dark and ugly, so she created a potion in a large cauldron in which inspiration and divine knowledge are brewed for her son. Little Gwion Bach (the young Taliesin) was given the job of guarding & stirring the cauldron for a year and a day- but three drops fall out onto his finger, and Gwion accidently receives the magical properties of the potion. Cerridwen is full of rage, and chases him, pursuing him through a cycle of changing shapes (which correspond both to totem animals and to the turning of the seasons- and the elements of creation). Gwion- with his newfound shaman knowledge, changes into a hare, and Cerridwen chases him in the form of a greyhound. Gwion changes into a salmon, and she changes into an otter. He changes into a crow- she changes into a hawk, giving him no rest in the sky. Just as she was about to stoop upon him, he saw a heap of winnowed wheat on the floor of a barn, and changing into a grain of wheat, hides himself in the pile. Then Cerridwen chuckling, changes into a high crested black hen, and eats the pile of grains. Now Gwion is growing inside Cerridwen for nine months. When he was born, he was so beautiful, she couldn't kill him- so she wrapped him in a bag and cast him to sea. He was fished out of a salmon weir by Elphin, a prince, and when he opened it saw the forehead of the boy, and said 'behold a radiant brow'- and so Taliesin was named. He was a great magician, poet, prophet. In the sixth century, a great poet name Taliesin was associated with the mythical bard.
Original Design by  Jen Delyth  ©1999