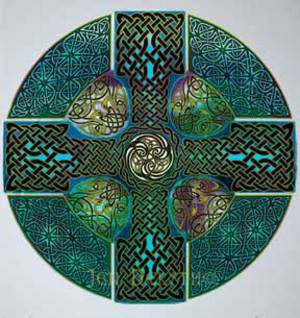 Often associated with the Tree of Life, the Celtic Cross predates Christianity, the oldest example from 10,000 BC. The first cross symbols represented the sun. In the megalithic age and in the Celtic epoch, the sun was considered to be the divine center of the cosmos, the ¨light of the world¨. The sign of the sun is the circle with a centre. The circle represents the whole, the encircling spirit, the sun illuminating - an all-embracing essence of light. In the Celtic Cross, it is the center where all forces come together. The central spiritual source is here represented by a triskele motif symbolising the mystical Celtic trinity. The cross is the cosmic wheel, representing the four seasonal positions of the sun - cosmic order - the four directions, elements, four seasons. The Wheel Crosses have round heads of large diameter and shortshafts and are peculiar to Wales, Cornwall and the Isle of Man. This design is based on the great wheel-cross of Conbelin at Margam Abbey, South Wales.
Original Design & Text by Jen Delyth © 1997