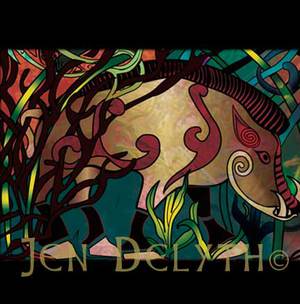 Boar is a symbol of valor and ferocious strength for the warriors, one of the most popular animal symbols for the Celts. But unlike the Stag, the Bull and the sacred birds, the Boar was not particularly revered until the Iron Age Celts. The Boar symbol appears as a crest on the helmets of the warriors, and Celtic coins feature the Boar as a universal symbol of strength and fertility – sometimes portrayed with triple horns and often associated with the Tree of Life. Boars appear throughout mythology as magical, often destructive supernatural beasts. In the Welsh Maginogi stories, Gwydion tells Math son of Mathonwy of the arrival of strange creatures from the south called pigs – hobeu – belonging to Pryderi who got them from Arawn, King of Annwn, the Celtic Otherworld. The hunting of the Otherworld pigs is a favorite theme. The most legendary boar is Twrch Trwyth (Welsh) or Torc Triath (Irish): The King of the boars from whom Magh Treitherne is named. The great boar was once a wicked king. He and his followers were transformed into swine who laid waste to a third of Ireland. In the story of Culhwch and Olwen (the Mabinogi) Culhwch and Arthur are sent on a seemingly impossible quest to snatch the treasure of bristles from between the ears of the ferocious . In the battle of Mag Mucrime, pigs of magic, mucca gentliuchta, were said to come out of the cave of Cruachan, which is Ireland’s gate of the Underworld, and the Red Swine of Derbrenn appear frequently in the early tales. Fenian warriors hunt the treacherous, powerful boars, who lead the heroes to the Otherworld.
Artwork and Text by Jen Delyth  ©2003