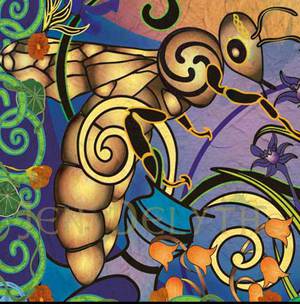 The Bees gather pollen from the lavender to create golden honey for their Queen. The Celts loved their bees and their mead - an intoxicating drink made from honey - which was made by monks and farmers alike. Celtic mythology tells of a river of mead running through paradise. In Ireland, the Brehon laws provided careful protection for the Bees, and in the Isle of Man it was for a long time a capital crime to steal them.  Ireland was celebrated for swarms of bees. In most parts of the Highlands until fairly recently, a farmer had two or three hives producing an abundance of honey. The Highlanders had an ancient liquor made from the honey, similar to mead, called mil dheaoch. The Welsh also made mead - named for "medclyg" or "medicine" - the mead maker was one of the most important people in the house of the King of Wales!  In Celtic mythology, the bee is a messenger between our world and the spirit realm. Bees are also associated with wisdom: "If a swarm of bees enters a house or settles on the dead boughs of a tree near the premises, the old people say 'death will soon follow'.  When there is a death in a household the head of the family whispers the news to the bees, and the beehives are turned around before the funeral.  There was an old Welsh belief that new-born babies who died immediately after their birth became a new flower in the land". ~ Excerpted from 'Folk Lore and Folk Stories of Wales' by  Marie TrevalyanArtwork and Text by Jen Delyth  ©2003